* 100% replacement of Antimony on active basis

DynaSil™ offers a unique approach to flame retardancy. When the DynaSil™ burns, it forms a thin glass barrier that holds the halogen or active flame retardant in the matrix for maximum efficiency. As the fire is put out the material flows to the oxygen rich surface and rapidly crystalizes to form a robust char layer that will choke off the fuel source and prevent the polymer from reigniting. Even after Burning the DynaSil™ remains in the matrix and a second burn will cause the DynaSil™ to flow to the exposed area and reform a solid char prohibiting further burn.

Decrease Smoke Generation without the use of Metal salts or AOM

To demonstrate the additional benefits of DynaSil™, AOM (ammonium octomolybdate) was removed from the Plenum formulation and was replaced with DynaSil™. The control sample and the replacement sample were then sent to an outside lab for evaluation in a cone calorimeter. These results not only show that Dynasil™ successfully works as a replacement for AOM, it also provides for reduced peak heat release, reduced smoke parameters and improved Fire Performance Index. 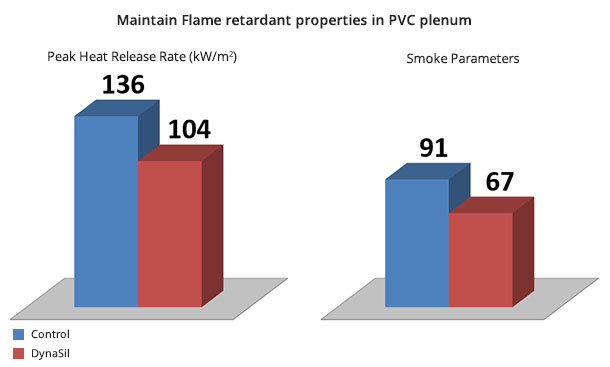 Remove Antimony from Polyamide and Other Engineering Plastics

Dynasil™ effectively eliminates the need for antimony or reduces the amount of antimony required in most engineering plastics, while improving other properties. Evaluating DynaSil™ at varying loadings in polyamide 6,6 shows that Dynasil™ remains effective at half the active level of antimony.

Use DynaSil™ to improve LOI and balance mechanical properties. To demonstrate this improvement, we took a simple Low Smoke Zero Halogen formula filling polypropylene with 60% magnesium hydroxide and added 5% Dynasil™. The result was a 38% improvement in LOI with only this small addition.

To evaluate the effect of DynaSil™ on mechanicals a 50% loaded system was evaluated various loadings of DynaSil™ to see the effect on tensile and elongation. The DynaSil™ did affect tensile strength negatively while increasing elongation to 94% with increasing loading level. The LOI was again improved with the low 5% loading of DynaSil™.

DynaSil™ is a unique tool that can be used to formulate flame retardant compounds with properties that previously were not possible. Although the properties above show a drastic give and take of properties, this is a very simple system containing only resin, flame retardant and DynaSil™. Utilizing DynaSil™ as tool in a formulated system the loss in tensile can be easily addressed, and the elongation can also be drastically increased. Our DynaChar compounds utilize the DynaSil™ technology to offer a system with LOI above 43, elongation above 150% and tensile strengths greater than 1750PSI.

Consult with our technical staff about your needs and we'll help you create amazing products. Try us out and let us know what you think!